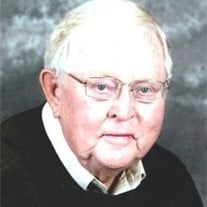 Richard Dean "Dick" Woebbeking, 74, was stricken suddenly and unexpectedly and went to be with Jesus at 9:30 p.m. on October 15, 2014 at home. A lifelong Allen County resident and lifelong member of Christ Lutheran Church, Woodburn, he was born on a farm north of Woodburn on April 4, 1940 to the late Herbert and Anita (Knoblauch) Woebbeking. He and his wife Joan Kay (David), were married on May 28, 1965, and moved to a home north of Monroeville in 2009. He retired from Uniroyal Goodrich, Woodburn, in 2001 after 40 years (and one day!) of service. Dick was affectionately called "Red" by his co-workers and "Dudsy" by his friends. He was a loving husband, father, grandfather, brother, and friend. He loved IU Basketball, the Detroit Tigers, and watching old westerns on television. He will be missed by all who knew him. He is survived by his wife of 49 years, Joan; daughters, Beth (Todd) Gremaux of New Haven, Amy (James) Anderson of Angola, Dawn Cain of Woodburn, and Cari (Doug) Dobson of Indianapolis; grandchildren, Brian Gremaux, Reagan Stevenson, Sidney Stevenson, Miller Dobson, and Jaiden Cain; brother, Don (Laurel) Woebbeking of Hudson; sisters-in-law, Pat (Dave) Smith, Norma (Dave) Shelburne, and Suzanne David; and many nieces and nephews and their families. He was also preceded in death by his brother, Gene Woebbeking; an infant daughter, Anne Christine Woebbeking; and brother-in-law, Herbert E. David. Funeral Service is 11 a.m. Monday at Christ Lutheran Church, 4412 Park St., Woodburn, with calling one hour prior. Pastor Timothy Edwards officiating. Calling is 2 to 5 and 6 to 8 p.m. Sunday at the church. Burial in the church cemetery. Preferred memorials are to Christ Lutheran Church. Arrangements by E. Harper & Son Funeral Home, 740 St. Rd. 930 E., New Haven. To share online condolences go to www.harperfuneralhome.com.

Richard Dean "Dick" Woebbeking, 74, was stricken suddenly and unexpectedly and went to be with Jesus at 9:30 p.m. on October 15, 2014 at home. A lifelong Allen County resident and lifelong member of Christ Lutheran Church, Woodburn, he was born... View Obituary & Service Information

The family of Richard Dean "Dick" Woebbeking created this Life Tributes page to make it easy to share your memories.