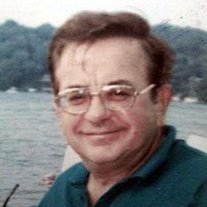 Paul "PJ" James Warney, 90, passed away Monday, March 16, 2015 at Miller's Merry Manor, Fort Wayne. PJ went to be with his Lord and Savior surrounded by his family. Born in Dickson City, Penn., he was the son of the late Alfonso and Freda (Mathias)... View Obituary & Service Information

The family of Paul "PJ" James Warney created this Life Tributes page to make it easy to share your memories.