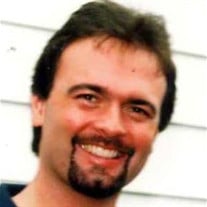 John Robert Bredemeyer, 52, departed this life on Sunday, January 17, 2016 at Parkview Regional Medical Center, Fort Wayne. Born in Fort Wayne on August 26, 1963, he was the son of Robert H. and Carol A. (Brunner) Bredemeyer. He graduated... View Obituary & Service Information

The family of John Robert Bredemeyer created this Life Tributes page to make it easy to share your memories.

Send flowers to the Bredemeyer family.