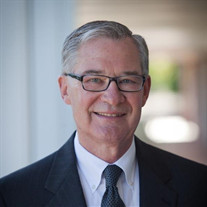 John Marshall Behrendt, 73, died Saturday, Nov. 26, 2016 after a brief, but extremely difficult, struggle against the unexpected return of the leukemia from which he had been in remission for almost 4 years. He and his identical twin, Joe, were born March 7, 1943 in Newton, Kansas to Eric and Bernice Behrendt. He grew up in Gillette, Wyoming and was a star basketball and track athlete for the Campbell County Camels. He received a BS in education from Montana State University at Billings. During his senior year there, he met his future wife, Ardis Ann (Howe), through the young adults group at their local Lutheran church. She was from New Haven, but had moved “out West” for her first teaching position. They were engaged within 6 months of their first date, a concert by the Back Porch Majority at a local music venue. During their engagement, John lived in Alberta, Canada where he was a high school teacher of business courses and German language. John and Ardis were married July 23, 1966 at Emanuel Lutheran Church in New Haven, and celebrated their 50th wedding anniversary this past July. The young couple moved to Rocky River, OH where John had a teaching position at Lutheran West High School. In February 1967, John joined the US Air Force and was selected to attend Officer Training School. He achieved the rank of Captain before leaving the Air Force in May 1971. Their two daughters, Beth and Sarah, were born to them during his service at Whiteman Air Force Base, Missouri. While in the Air Force, John obtained his MS in Business Administration from The University of Central Missouri. After the Air Force, the family moved to New Haven and John began his career with Lincoln National Life Insurance. Except for three years as a stockbroker with Traub & Co. and Thompson McKinnon Securities, John worked at Lincoln in various executive positions for 30 years, including founding Lincoln National Corporation’s broker-dealer business, Lincoln Financial Advisors, in 1984. He served as its president until 1993. After retiring from Lincoln, John and three partners founded Phillips Financial Management in 2004. He served as its first chief investment officer and chief compliance officer until 2008. John was an active participant in the governance of The Lutheran Church-Missouri Synod. He was chairman of the Board for Pastoral Education (2004-2010) and a member of the Board for Higher Education (1998-2004). He was a member of the Concordia Theological Seminary Fort Wayne’s Board of Regents (2012-present) and also chairman of its Finance and Investment Committees (2011-present). John was an avid collector (and enjoyer) of wine, an enthusiastic and hardworking gardener’s assistant to his wife, and an instructor of woodworking to his grandchildren. He was a constant source of wisdom, strength, and humor to his family and all who were fortunate to know or work with him. John is survived by his wife, Ardis, and his daughters Beth (children Jack, Mick, and Max DeSalvo) and Sarah (husband, Mike Hollman, children Ned and KatieBeth); as well as his brother Joe (Jamie), and 18 nieces and nephews. He was preceded in death by his parents and by his sister, Carol McKeever, and brothers Kenneth and Douglas Behrendt. Funeral service is 1 p.m. Friday, December 2, 2016 at Zion Lutheran Church, 2313 S. Hanna St., Fort Wayne with calling one hour prior to service. Pastor Doug Punke officiating. Calling is also 2 to 4 and 6 to 8 p.m. Thursday at E. Harper & Son Funeral Home, 740 State Road 930 East, New Haven, IN. Burial in Emanuel Lutheran Cemetery, New Haven. Preferred memorials are to the John and Ardis Behrendt Charitable Fund (of the Community Foundation of Greater Fort Wayne), Zion Lutheran Church Endowment Fund, Concordia Theological Seminary Fort Wayne, or Visiting Nurse and Hospice Home of Fort Wayne.

John Marshall Behrendt, 73, died Saturday, Nov. 26, 2016 after a brief, but extremely difficult, struggle against the unexpected return of the leukemia from which he had been in remission for almost 4 years. He and his identical twin, Joe, were... View Obituary & Service Information

The family of John Marshall Behrendt created this Life Tributes page to make it easy to share your memories.

Send flowers to the Behrendt family.