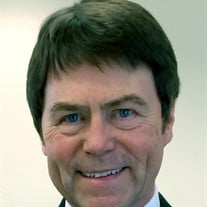 James Michael “Mike” Rousculp, 69, passed away on Thursday, May 16, 2019 at home with his family by his side. Born in Lima, Ohio he was the son of the late James and Patricia (King) Rousculp. He was a member of St. John the Baptist Catholic Church, Tipp City and the Knights of Columbus. He retired in 2010 from Darke County Educational Services. He was a teacher and school psychologist in several local school systems. Mike was a DayTony award winning actor, director and musician who performed at many theaters in the Dayton area. Perhaps best known for his music career, his talent took him on gigs all over the country. Many have enjoyed Mike’s bass skills and vocals in bands including The Post, Dixie Peach, Headlines, the Dinosaurs, Ticket to Ride, The Cyrkle, and the Gas Pump Jockeys. He was also a member of the Sons of the American Revolution and a CASA volunteer. He is survived by his wife of 21 years, Debra (Essex) Strauss; children, Meagan (Chad) Dunn and Bethan Rousculp both of Tipp City, Devin (Kaslin) Rousculp of Dayton; step-children, Kyle (Sarah) Kret of Saugus, CA and Erik (Kate) Strauss of Beavercreek, OH; siblings, Susan (James) Dixon of Hustonville, KY, Laura Chickey of South Carolina, and David (Patricia) Rousculp of New Haven, IN; and previous spouse, Vicki Hahn. He was also preceded in death by his sister, Anne Lorms in 2015. Mass of Christian Burial is 11 a.m. Saturday at St. John the Baptist Church, 753 S Hyatt St, Tipp City with visitation one hour prior to service. Father Marc Sherlock officiating. Visitations is also Friday 2 to 7 p.m. at the church. Burial in St. John’s Cemetery, Tipp City. Preferred memorials are to Pancreatic Cancer Action Network (pancan.org). Funeral arrangements entrusted to his brother David Rousculp. To share online condolences, go to www.harperfuneralhome.com.

The family of James Michael "Mike" Rousculp created this Life Tributes page to make it easy to share your memories.

James Michael “Mike” Rousculp, 69, passed away on Thursday, May...

Send flowers to the Rousculp family.