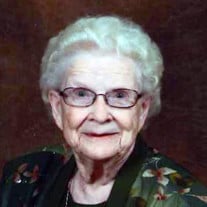 Yvonna Elaine Conrad, 88, passed away Monday, December 4, 2017 at home with her family by her side. Born in Orland, she was the daughter of the late Herman and Frances (Kentner) Straw. She was a member of St. Louis Besancon Catholic Church,... View Obituary & Service Information

The family of Yvonna Elaine Conrad created this Life Tributes page to make it easy to share your memories.

Send flowers to the Conrad family.