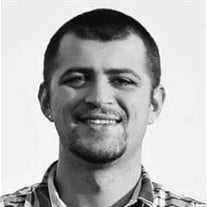 Troy Douglas Tripp, 28, passed away Tuesday, June 6, 2017. He was a customer service representative for the Cintas Corporation. He was an avid Batman fan and participated in mixed martial arts. He is survived by his father, Douglas (Yvonne)... View Obituary & Service Information

The family of Troy Douglas Tripp created this Life Tributes page to make it easy to share your memories.

Send flowers to the Tripp family.