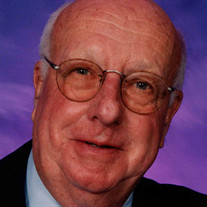 Russell Finley McIntosh, 89, passed away Friday, November 2, 2018 at Towne House Retirement Center, Fort Wayne. Born in Fort Wayne, he was the son of the late Cary and Elda (Hankel) McIntosh. He was a member of New Haven United Methodist Church. He served his country in the US Army during the Korean War and was a Purple Heart recipient. He was the founder of McIntosh Energy, a business he started in 1953. He was also a Mason, Shriner, and member of American Legion Post 330 and the Model “A” Car Club. He enjoyed running his business, camping, cookouts, and working on his tractors and cars. He cherished spending time with his family and especially his grandchildren and great grandchildren. He loved bulldogs, jelly beans, and Coney Island hotdogs. He is survived by his children, Ray (Vicki) McIntosh of Fort Wayne, Stuart McIntosh of Chantilly, VA, and Sarah (Rich) Miller of New Haven; grandchildren, Andrew, Erin, Sean, Nathan, Erica, and Taylor; and three great grandchildren. He was preceded in death by his wife of 52 years, Joan McIntosh in 2006; and siblings, Henry McIntosh, Evelyn Burkamp, Charles McIntosh, Ethel Wente, Dorothy Knipstein, and Virgil McIntosh. Funeral services are 11 a.m., Thursday at Harper’s Community Funeral Home, 740 St. Rd. 930 E., New Haven with visitation one hour prior to service. Chaplain Doug Vogel officiating. Visitation is also 3 to 7 p.m. Wednesday at the funeral home. Burial in IOOF Cemetery, New Haven. Preferred memorials are to American Diabetes Association or the Wounded Warrior Project.

The family of Russell Finley McIntosh created this Life Tributes page to make it easy to share your memories.

Send flowers to the McIntosh family.