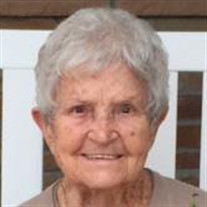 Rosemary (Hankins) Crance, 93, was born September 29, 1923 in Geronimo, Oklahoma, and died peacefully at Parkview Randallia Hospital on January 17, 2017 following a stroke. She was the daughter of Frank E. Hankins and Grace Jenny Wykle. She is survived by her daughter, Margaret Ann (Crance) Smith, grandsons, Grady [Jaime Lyn] Smith of Fishers, Gavin Smith [Callie Yax] of Santa Ana, CA, and Garrett Smith of Fort Wayne, son, Major (Ret) Jack R. Crance II [Col. (Ret) Patricia A. Dooley], sister, Betty Ann Cole, great-granddaughter Addison Paige Smith, great-grandson Camden Lowell Smith, and numerous nieces and nephews. She was preceded in death by her husband of 54 years, Jack R. (1997); parents; mother-in-law, Alice M. Crance (1966); sisters, Margaret M. Bailey Lake, Dorothy Lundberg Keck, and brothers, Fielding, Henry, Ned, and Spencer Hankins. She married Sgt. Jack R. Crance in 1942 after meeting him at a USO dance at Ft. Sill, Oklahoma, moved to Ft. Wayne in 1944 and on to New Haven in 1951. During WWII she worked for International Harvester Corporation and later was an operator for General Telephone, a rural newspaper carrier, and an athletic secretary at New Haven Junior High. She finished her career as an attendance secretary at Paul Harding High School and retired from East Allen County Schools with 21 years of service. Rosemary was a renowned dressmaker—beginning her craft as an 8th grader and continuing until 2014. She designed and sewed bridal gowns, attendants’ dresses, men’s and women’s suits, prom dresses, and sofa cushions, and altered garments for five generations of patrons in the New Haven area. She graduated from Lawton High School in 1941 and from Cameron College in 1943 with a secretarial degree. She was a forward on the Harvester Women’s basketball team and played 1st base on the Women’s softball team. She learned to play golf at the age of 49 and became an avid golfer, playing in the Ft. Wayne City Tournament for many years. She was medalist in 1980 at the age of 56 and later won a gold medal at the White River State Games in the 65+ age group. She was League Champion at Lakeside Golf Course and played in the River Bend Golf Club Championship, the River Bend 18-hole League, and Ft. Wayne Interclub League. She was president of the River Bend 18-hole League for 3 years, president of the Ft Wayne Women’s Golf Association for 2 years, president, recording secretary, and treasurer of the New Haven Woman’s Club, president of the Ft. Wayne Dressmaker’s Guild, vice-president of Tri-County Nile Club, treasurer of Ft. Wayne Chapter #432, OES, and secretary of New Haven Chapter #593, OES for 3 years. She instituted and was chairman of the Mizpah Shrine Ladies Golf Outing from 1994 to 2009. She also volunteered her time as a scorekeeper for the Mad Anthony’s Golf Tournament for 23 years, the Scott’s Pro-Am Zoo Outing for 13 years, the Scott’s Pro-Am Cancer Day Outing for 15 years, and the Vera Bradley Golf Tournament. She was a member of the New Haven United Methodist Church for over 63 years; Mizpah Shrine Legion of Honor Ladies Auxiliary; Mizpah Shrine Hillbilly Clan; Teti Sheri Temple No. 60, Daughters of the Nile; Nile Pageantry Unit (President); Waynedale and Ft. Wayne Chapters of Order of the Eastern Star; and New Haven Woman’s Club (President). She enjoyed playing bridge and euchre and traveling to her timeshares in her spare time. She spent her last two years at Woodview Assisted Living where she was an avid card player and enjoyed meeting new people and making new friends. In her earlier years she and Jack had a large garden and grew nearly all their vegetables including her beloved okra. Canning and freezing the produce kept her busy between sewing appointments. She was also active with the Kekionga Voyagers Canoe Club and canoed in the summer, hiked in the fall, and cross-country skied in the winter. She will be remembered for her friendly smile, thoughtfulness, dressmaking skills, and willingness to help others by volunteering for various activities and committees. Memorials to the Shrine Hospitals for Children or Parkview Hospice. Funeral service is 11 a.m. Saturday at E. Harper & Son Funeral Home, 740 St. Rd. 930 E., New Haven with calling one hour prior. Pastor Chuck Fenwick officiating. Calling is also 1 to 9 p.m. Friday at the funeral home with an Eastern Star service at 7 p.m and a Daughters of the Nile service at 7:30 p.m. Burial in Lindenwood Cemetery, Fort Wayne.

Rosemary (Hankins) Crance, 93, was born September 29, 1923 in Geronimo, Oklahoma, and died peacefully at Parkview Randallia Hospital on January 17, 2017 following a stroke. She was the daughter of Frank E. Hankins and Grace Jenny Wykle. She... View Obituary & Service Information

The family of Rosemary (Hankins) Crance created this Life Tributes page to make it easy to share your memories.

Send flowers to the Crance family.