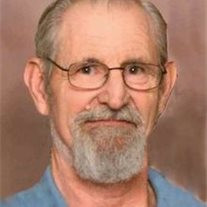 View Video Tribute Roger L. "Flash" Barton, 71, of Fort Wayne, formerly of Warsaw, went to be with his heavenly father on June 1, 2015 at 7:02 p.m. with his family by his side. He was born on August 8, 1943, in Pierceton, IN to Max Donald and Josephine (Richardson) Barton. On August 14th, 1965 he was united in marriage to Susan Moore in Ora, IN and were given a surprise 50th Anniversary party this past May by their family. He loved his family and enjoyed quality time with his kids, grandchildren, and great grandchildren. He was Past-President of Warsaw Fraternal Order of Eagles #1339; Vice President of Indiana State REACT Council and Tri-County REACT. He helped organize the Land'O Lakes CB club in 1975 and spent many hours helping people. Recently, he and his wife became promoters of the Akron (Go-Kart) Speedway, Akron, IN. He loved NASCAR, especially Mark Martin; enjoyed playing corn hole and horseshoes with family, shuffleboard, pool, and go-karts. He is survived by his wife of 50 years, Sue; daughters, Holly (John) Davis of Waterford, CA, Tracy Abbott of Fort Wayne, and LeAnn (Kevin) Bennett of Warsaw; sons, Donald (Kim) Barton of Warsaw, Jason Barton and Cory (Virginia) Barton both of Fort Wayne, and John (Amanda) Mattson of Warsaw; siblings, Lily (Donald) Miller and Larry (Lori) Barton both of Warsaw, and Ted (Laurie) Barton of Melbourne, FL; 25 grandchildren; 31 great grandchildren; their beloved 34 year old parrot, Sammy; and a large extended family. He was preceded in death by his parents; and four grandchildren. Funeral service is 11 a.m. Monday, June 8, 2015 at McHatton-Sadler Funeral Chapel, 2290 Provident Ct., Warsaw with calling two hours prior to service. Pastor Doug Lemon officiating. Calling is also 1 to 5 p.m. Sunday, June 7, 2015 at McHatton-Sadler Funeral Chapel, Warsaw and 2 to 6 p.m. Saturday June 6, 2015 at E. Harper & Son Funeral Home 740 St. Rd. 930 E., New Haven. Burial in Oakwood Cemetery, Warsaw at a later date. Preferred memorials are to Parkview Home Health & Hospice or the family.

View Video Tribute Roger L. "Flash" Barton, 71, of Fort Wayne, formerly of Warsaw, went to be with his heavenly father on June 1, 2015 at 7:02 p.m. with his family by his side.... View Obituary & Service Information

The family of Roger L. "Flash" Barton created this Life Tributes page to make it easy to share your memories.