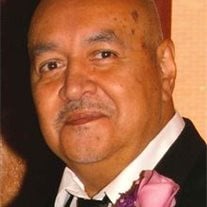 View Video Tribute Robert E. "Bobby" Laguna, 63, passed away on Saturday, April 25, 2015 at Parkview Regional Medical Center, Fort Wayne. Born in Fort Wayne, he was the son of the late Francisco and Petra (Espinoza) Laguna. He attended Queen of Angels Catholic Church, Fort Wayne. Bob had a love of music and dancing, which led him to work as a disc jockey early in life. He later went on to work at WMEE, WANE TV, and Dupont Hospital. He was also a movie lover and superhero enthusiast. The next time you see a Marvel movie, please think of the joy it brought to Bobby. He is survived by his daughter, Hope (Justin) Zellers of Fort Wayne; siblings, Louise Smith, Ortencia Van Horn, Josephine Mata, Teresa (George) Eix, and James Laguna all of Fort Wayne, Guadalupe Andonegui and Ruben (Vera) Laguna both of Defiance, OH, Joe (Crystal) Laguna of Redonda Beach, CA, Esther Nunez of Pasadena, CA, Jane (Dan) Graef of Big Bear, CA, and Estella (Bruce Wood) Laguna of Alexandria, VA; and his beloved dog, Mr. Wiggles. He was also preceded in death by his brother, Manuel Laguna in February 2015. A Celebration of Life will be 2 to 4 and 6 to 8 p.m. Thursday at E. Harper & Son Funeral Home, 740 St. Rd. 930 E., New Haven with a special prayer at 3:30 p.m. Preferred memorials are to the National Kidney Foundation or the American Diabetes Association. To make this a true celebration of Bobby, feel free to sport your favorite comic book accessory.

The family of Robert E. "Bobby" Laguna created this Life Tributes page to make it easy to share your memories.