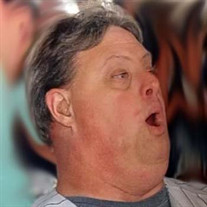 Michael Wayne Lord, 55, passed away Saturday, February 25, 2017 at Naples Community Hospital, Naples, FL. Born on the Nouasseur Air Base in Morocco, he was the son of the late Vayne and Muriel (Gillie) Lord. He worked at LifeScape in Sioux... View Obituary & Service Information

The family of Michael Wayne Lord created this Life Tributes page to make it easy to share your memories.

Send flowers to the Lord family.