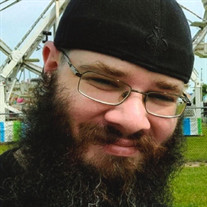 Matthew Paul Ely, 32, passed away on Friday, October 8, 2021, unexpectedly. Born in Bluffton, he was the son of the Larry Paul (Angela) Ely and Gina (Dave) Urick, both parents survive. He was an Amazon delivery driver contracted by Lucky Viking,... View Obituary & Service Information

The family of Matthew Paul Ely created this Life Tributes page to make it easy to share your memories.

Send flowers to the Ely family.