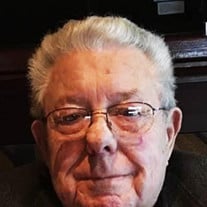 Martin "Leroy" Kinney, 84, passed away peacefully at home, with family at his side, on Monday, January 24, 2022. Leroy was born July 17, 1937, in New Haven, Indiana, to Ward and Henrietta (Hanefeld) Kinney. In 1954, Leroy met the love of his life, Sandra Kay Grubb. She walked past him on the street, and Leroy insisted on carrying her books. Two years later, they were married (February 11, 1956) and proceeded to have eight children. To this day, Sandra will still tell you Leroy is the cutest boy she's ever seen. Leroy began his career as a brakeman on the Nickel Plate Railroad in November 1955 alongside his father-in-law, Walter Grubb, who insisted that Leroy have a good job if he wanted to marry his daughter. Leroy retired as a conductor after 40 years of service. He was proud to identify as a recovering alcoholic. Leroy began his journey to sobriety at age 48 after God sent him a message through a tiny acorn. He was sober for the remaining 36 years of his life. During that time, Leroy played an active role in the AA program and forged many lifelong friendships. Over the years, Leroy enjoyed many hobbies - including remodeling the house, woodworking and collecting coins. Leroy is survived by his wife, Sandra Kay Kinney; seven children, Deb (Ray) Viggiano, Dave (Rosy) Kinney, Rick (Kim) Kinney, Keith (Lisa) Kinney, Tim (Kelly) Kinney, Pam (Dave) Boyko, and Gary (Aleia) Kinney; 21 grandchildren; and 33 great-grandchildren to count. He was preceded in death by his parents, Edward Ward and Henrietta Kinney; his brothers, Vernon and Kenneth Kinney; daughter Jane Meraz; grandson Rob Viggiano; three great-grandbabies; and many close friends. Funeral service is 2 p.m. Wednesday, February 2, 2022, at Harper's Community Funeral Home, 740 St. Rd. 930 E., New Haven with visitation from 10 a.m. until time of service. Pastor Matthias Snodderly will officiate. Burial in Emanuel Lutheran Cemetery, New Haven. To share online condolences, please visit www.harperfuneralhome.com.

The family of Martin Leroy Kinney created this Life Tributes page to make it easy to share your memories.

Martin &quot;Leroy&quot; Kinney, 84, passed away peacefully at home, with...

Send flowers to the Kinney family.