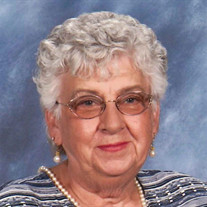 Marian Augusta (Vonderau) Webber, 88, of Fort Wayne, passed away on Tuesday, May 8, 2018 at Golden Years Homestead, Fort Wayne. Born on November 1, 1929 in Allen County, Indiana she was the daughter of the late Bertha and Oscar Vonderau. She graduated from New Haven High School in 1947. On August 12, 1950, she married Jack Webber and after 52 and a half years of marriage he preceded her in death on April 26, 2003. She was a member of St. Peter’s Lutheran Church where she volunteered over the years in many ways. After high school, she worked for Lincoln Life until her first child was born. She was a stay at home mother until her youngest child was in school. She then worked for L.S Ayres and Sears until her retirement in 1990. In her later years, Marian served on the funeral committee and Ladies Aid through the church. She would deliver copies of church services and bulletins and visit with those that were homebound and in nursing care. Once Marian retired, she and her husband were active in community events and planning at Tangerine Woods in Englewood, Florida. They spent their Winters in Englewood, FL and their Summers in Clear Lake, IN. Marian returned to Fort Wayne after her husband’s death and resumed her activities and her support at St. Peter’s Lutheran Church. Marian was known for her wit, her laugh and her amazing spunk, even as she battled cancer for nearly two years. Marian is survived by her three children, Shirley (Tom) Brandt, Gayle (Ken) Cooper, and Kurt (Beth) Webber all of Fort Wayne; grandchildren, Erik (Karen) Brandt, Ryan Brandt, Aimee Brandt, Nathan Clymer, Reid Webber and Sydney Webber; and six great-grandchildren. She was also preceded in death by her brother, Maurice Vonderau. Funeral service is 11 a.m. Tuesday at St. Peter’s Lutheran Church, 7710 E. State Blvd., Fort Wayne with calling one hour prior. Pastor Steve Ahlersmeyer officiating. Visitation is also 2 to 4 and 6 to 8 p.m. Monday at Harper’s Community Funeral Home, 740 St. Rd. 930 E., New Haven. Burial in the church cemetery. Preferred memorials to St. Peter’s Lutheran Church Endowment Fund or Visiting Nurse.

Marian Augusta (Vonderau) Webber, 88, of Fort Wayne, passed away on Tuesday, May 8, 2018 at Golden Years Homestead, Fort Wayne. Born on November 1, 1929 in Allen County, Indiana she was the daughter of the late Bertha and Oscar Vonderau. She... View Obituary & Service Information

The family of Marian Augusta Webber created this Life Tributes page to make it easy to share your memories.

Send flowers to the Webber family.