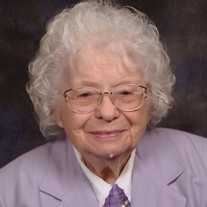 Loretta L. Go-On, 97, passed away Tuesday, January 25, 2022, at Heritage Park, Fort Wayne. Born in Fort Wayne, she was the daughter of the late John and Rose (Gerardot) Speith. She attended First Assembly of God, Fort Wayne. She worked at... View Obituary & Service Information

The family of Loretta L. Go-On created this Life Tributes page to make it easy to share your memories.

Send flowers to the Go-On family.