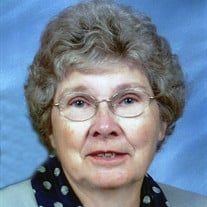 Lois Marie Schaper, 91, passed away on Friday, February 11, 2022, at Parkview Hospital Randallia, Fort Wayne. Born in Napoleon, Ohio she was the daughter of the late Arthur and Ida (Gebers) Helberg. She was a 1949 graduate and valedictorian of Ridgeville Corners High School, Ridgeville, OH. She went on to graduate from International Business College in 1950 which was followed by her first job in the office of the Central District of Missouri Synod Lutheran Church. She later worked for a part-time public defender and went on to retire from Glaze Tool, New Haven in 1992. She once said, "There are times when I stop to think back to high school and I realize that the class in which I made my lowest grades, typing, has provided me my source of income." She was an active member of Martini Lutheran Church, New Haven where she was a Sunday school teacher, served on the stewardship committee and helped with the fish fry. She enjoyed gardening and tending to the apples, peaches and pears in her orchard. She also enjoyed sewing and spending time with grandchildren. She is survived by her daughters, Cathy (Kelly) Mettert of New Haven and Sandra "Sandy" Schaper of Fort Wayne; siblings, Lillian (Vernon) Wachtman of Defiance, OH, Leroy (Ruth) Helberg of Napoleon, OH and Karen (David) Stephens of Seagrove, NC; brother-in-law, Raymond "Vern" Badenhop of Napoleon, OH; and grandchildren, Alex Reilly, Mikayla Haggarty, Christina "Tina" Mettert, Kaitlyn Mettert and Andrew "AJ" Mettert. She was also preceded in death by her husband of 57 years, Gerhardt J. Schaper Jr in 2015; and sister, Lou Ann Badenhop. Funeral service is 11 a.m. Wednesday at Martini Lutheran Church, 333 Moeller Rd, New Haven with visitation one hour prior. Visitation is also 2 to 4 and 6 to 8 p.m. Tuesday at Harper's Community Funeral Home, 740 St. Rd. 930 E., New Haven. Burial in the Martini Lutheran Cemetery. Preferred memorials are to the Martini Lutheran Church and Central Lutheran School. To share online condolences, please visit www.harperfuneralhome.com.

Lois Marie Schaper, 91, passed away on Friday, February 11, 2022, at Parkview Hospital Randallia, Fort Wayne. Born in Napoleon, Ohio she was the daughter of the late Arthur and Ida (Gebers) Helberg. She was a 1949 graduate and valedictorian... View Obituary & Service Information

The family of Lois Marie Schaper created this Life Tributes page to make it easy to share your memories.

Send flowers to the Schaper family.