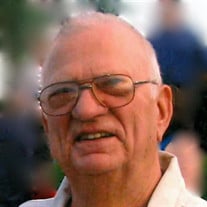 Lloyd Alban Gremaux, 83 of New Haven, passed away Monday, May 28, 2018 in Torch Lake Township, Michigan. He fell to his death while hiking with family and friends near a waterfall close to his son’s house in Houghton, MI. He was visiting Houghton with other family members to celebrate his grandson’s graduation. Lloyd was the son of the late Julian and Eleanor (Voirol) Gremaux. He was a member of St. John the Baptist Catholic Church, New Haven. He enjoyed gardening and traveling with his wife, Nancy and his children. He especially loved spending time with and joking around with his family. He was a loyal and devoted husband and father who took care of his wife who had become ill, until she passed away at home in 2017. He served his country in the army, stationed in Germany from 1958 until 1960. Nancy traveled to Germany where they were married in 1959. Lloyd was an electrician who worked for 28 years at International Harvester, until it closed and 10 years at General Motors after which he retired at age 61. He is survived by his children, Tim (Elise) Gremaux of Livonia, MI, Donald (Patty) Gremaux of New Haven, Larry Gremaux of Houghton, MI, Julie Gremaux of New Haven and Renee (Bryon) Scott of Fort Wayne; brother, Arnold (Charlene) Gremaux of Corunna; grandchildren, Matthew, Kenneth, Raymond and William Gremaux, and Seth, Jacob and Rachel Scott. He was also preceded in death by his wife, Nancy Ann (Isenbarger) Gremaux in March 2017; siblings, Walter and Joe Gremaux, Elsie Snyder, Veronica Harkenrider, Eleanor Kelble, Dorothy Gray and an infant sibling. Mass of Christian Burial is 10 a.m. Saturday, June 2, 2018 at St. John the Baptist Church, 943 Powers St., New Haven, with calling half hour prior to service. His nephews, Father Glenn Kohrman, and Deacon Jerome Kohrman officiating with Father Bill Sullivan. Calling also from 2 to 4 and 6 to 8 p.m. Friday, June 1, 2018 at Harper’s Community Funeral Home, 740 St. Rd. 930 E., New Haven, with a vigil service at 3:30 p.m. Burial to follow in the church cemetery. Preferred memorials to Women’s Care Center of Fort Wayne, or Masses.

Lloyd Alban Gremaux, 83 of New Haven, passed away Monday, May 28, 2018 in Torch Lake Township, Michigan. He fell to his death while hiking with family and friends near a waterfall close to his son&#8217;s house in Houghton, MI. He was visiting... View Obituary & Service Information

The family of Lloyd Alban Gremaux created this Life Tributes page to make it easy to share your memories.

Lloyd Alban Gremaux, 83 of New Haven, passed away Monday, May...

Send flowers to the Gremaux family.