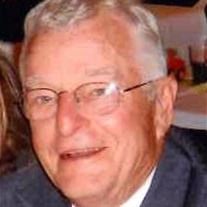 Kenneth “Kenny” Arend, 83, passed away on Saturday, August 13, 2016 at Summit City Nursing Home, Fort Wayne. Born in Fort Wayne, he was the son of the late Leo and Catherine (Martin) Arend. He was a member of St. Louis Besancon Catholic Church, New Haven. He graduated from Central Catholic High School in 1951 and later joined the Naval Reserve in 1951 and went active duty in 1954 thru 1956 during the Korean War. He graduated from International Business College. He worked at Essex Wire for 40 years and was the terminal manager of their truck fleet at the time of his retirement in 1997. Since his retirement, he worked for Conference & Travel and Tim Didier Meats. Kenny was an avid golfer and bowler. He loved traveling with his friends and family. He was especially proud of his five daughters and loved spending time with his grandchildren and great grandchildren. He is survived by his devoted and loving wife of 56 years, Carol Ann (Barclay) Arend; daughters, Ann (Karl) Kline, Peggy (Tim) Gerardot, and Amy Davis all of Fort Wayne, Michelle Cummins and Jean (Allen) Rife both of New Haven; siblings, Richard Arend, Margie Hensler, and Rosie Thompson all of Fort Wayne, Dorthy (Dale) Arnold and Joan (Kenneth) Brown both of New Haven; 14 grandchildren and 9 great grandchildren. He was also preceded in death by his infant son, Kenneth J. Arend; siblings, Basil Arend, Virginia Kroemer, and Betty Miller. Mass of Christian Burial is 10:30 a.m., Wednesday, at St. Louis Besancon Catholic Church, 15535 Lincoln Hwy E., New Haven with calling a one hour prior. Father Ben Muhlenkamp officiating. Calling is 2 to 4 and 6 to 8 p.m. Tuesday at E. Harper & Son Funeral Home, 740 St. Rd. 930 E., New Haven with a prayer vigil at 3:30 p.m. Burial in the church cemetery with military honors. Preferred memorials are to St. Jude’s Children’s Hospital or Mathew 25 Clinic, Fort Wayne.

Kenneth &#8220;Kenny&#8221; Arend, 83, passed away on Saturday, August 13, 2016 at Summit City Nursing Home, Fort Wayne. Born in Fort Wayne, he was the son of the late Leo and Catherine (Martin) Arend. He was a member of St. Louis Besancon... View Obituary & Service Information

The family of Kenneth "Kenny" Arend created this Life Tributes page to make it easy to share your memories.

Send flowers to the Arend family.