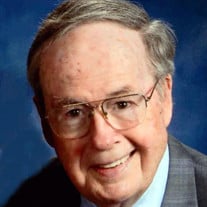 Joe Austin Mitchell, 86, a resident of the New Haven – Fort Wayne area since 1955, passed away Thursday, September 22, 2016 at home with his family by his side. Born in Benham, Kentucky on March 23, 1930, he was the son of the late Rev. John Hobart and Edna Amelia (Gaines) Mitchell. He retired in 1989 from Dana Corporation after 32 years. He was an active member of the New Haven United Methodist Church. He also shared a passion for the community with involvement in Jaycees, the New Haven Kiwanis Club, and by serving on the New Haven – Adams Township Park Board. As a Disabled Korean Veteran he held numerous offices in the American Legion, VFW, and was privileged to go on Honor Flight Northeast Indiana Flight #18 on October 7, 2015. Joe loved telling stories and he had lots of them; so many stories his children “numbered” them during a three week driving vacation to California in 1972; his nickname was “Joe Pearl” given to him by one of his high school teachers for being such a kind, considerate man. Joe and Georgia met while she worked in her uncle’s record store; he later confessed that he did not own a record player to play the records he was buying from her. He enjoyed playing euchre, driving red convertibles, and watching Kentucky and Kansas basketball (wagering dinner with Joni when they played each other). He is survived by his wife, Georgia, to whom he would have been married 61 years on October 1, 2016; son, David Austin (Sherma Pierson) Mitchell of Rome City; daughters, Rebecca Jean Baldwin of New Haven and Joni Renee (Stan) Hernly of Lawrence, KS; granddaughters, Haley Jean Quandt of New Haven, Ellen Marie Hernly of Nashville, TN, Erica Ann Hernly of San Francisco, CA, and Elizabeth Hernly of Lawrence, KS; brother, Gene Aaron Mitchell of Fremont; sister-in-law, JoAnne Mitchell of Fremont; and several nieces and nephews. He was also preceded in death by his son Dean; and brothers, Lyndon Hobart and Jack Wesley Mitchell Funeral service is 10 a.m. Tuesday at New Haven United Methodist Church, 630 Lincoln Hwy E., New Haven with calling one hour prior. Pastor Chuck Fenwick officiating. Calling is also 2 to 4 and 6 to 8 p.m. Monday at E. Harper & Son Funeral Home, 740 St. Rd. 930 E., New Haven. Burial in IOOF Cemetery, New Haven. In lieu of flowers, preferred memorials are to Honor Flight Northeast Indiana or New Haven United Methodist Church.

The family of Joe Austin Mitchell created this Life Tributes page to make it easy to share your memories.

Send flowers to the Mitchell family.