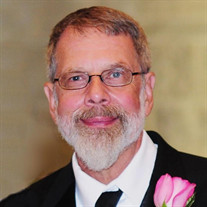 James Gilbert Kremer, 78, died Saturday, June 12, 2021 in Fort Wayne. He was known as Jim by his friends, and as Mr. Kremer by nearly everyone in New Haven, IN. Born in Milwaukee, WI in 1942, he was the son of the late Gilbert and Norma Kremer. Jim is survived by his children, Sarah (David) Schroeder and John (Ann) Kremer; sister Judy (Neal) Strehlow. He was the proud grandfather of Ben and Zach Kremer and Levi, Caleb, and Naomi Schroeder. Jim graduated from Milwaukee Lutheran High School in 1960. He graduated with a teaching degree from Concordia University River Forest in 1964. He also earned a master’s degree from St. Francis University in Fort Wayne, IN. Jim used his many talents to serve God and others. He taught junior high at Central Lutheran School in New Haven from 1965-2007. He taught many subjects including science, art, music, and theater. He was a talented musician who played the organ and lead various choirs. In his early years at Central he was a youth group leader and basketball coach. Over the years he directed plays at Central and was often involved in lighting and sound. He was very interested in computers and technology. He spent countless hours working on computers, creating and editing videos, as well as leading the robotics Lego team at Central. He helped produce Lutheran worship services for shut ins called Worship Anew. He was a talented carpenter and woodworker. He also loved to travel, sometimes serving others and often for pleasure. He was proud to have visited numerous countries around the world as well as nearly all of the 50 states. The older he got, the more adventurous he became going on safaris in Africa, zip lining in Costa Rica, and 4-wheeling in Cabo. Funeral service is 10:30 a.m. Thursday, June 17, 2021, at Emanuel Lutheran Church, 800 Green St., New Haven with visitations one hour prior to service. Visitation is also Wednesday 2 to 4 and 6 to 8 p.m. at Harper’s Community Funeral Home, 740 State Road 930 E., New Haven. Burial in the church cemetery. Preferred memorials to the Theater Department at Central Lutheran School, New Haven.

James Gilbert Kremer, 78, died Saturday, June 12, 2021 in Fort Wayne. He was known as Jim by his friends, and as Mr. Kremer by nearly everyone in New Haven, IN. Born in Milwaukee, WI in 1942, he was the son of the late Gilbert and Norma Kremer.... View Obituary & Service Information

The family of James Gilbert Kremer created this Life Tributes page to make it easy to share your memories.

Send flowers to the Kremer family.