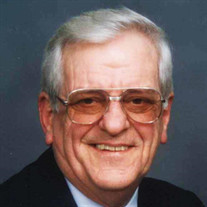 Hubert Joseph Sorg, 90, of Fort Wayne, formerly of New Haven, passed away Tuesday, December 6, 2016 at Parkview Regional Medical Center, Fort Wayne. Born in Hoagland, he was the son of the late Stephen and Florence (Hake) Sorg. He was a longtime member of St. John the Baptist Church, New Haven, where he was an usher and member of the Holy Name Society. He served his county in the US Army during World War II and was a past member of American Legion Post 330. Hubert was an award-winning car salesman and throughout his many year career worked with Parent Chevrolet, Bill McCormick Chevrolet, and Dehaven Chevrolet. The devoted grandfather often volunteered as a popcorn popper at New Haven Elementary and lovingly sported his “Gramp’s Taxi” license plate when dropping the grandchildren off at school. Most recently he and his wife were being cared for by the loving staff at Brookdale Assisted Living, but the community will always remember them as the longtime residents of 802 Park Ave., New Haven. He is survived by his children, Mark (Becky) Sorg and Kay (Don Etchegorry) Sorg both of New Haven; siblings, Gertrude Sorg-Wyss, Joan Sorg-Smith, Carl (Theresa) Sorg, Dorothy Sorg-Brown, and Ruth Ann Sorg-Lothamer; grandsons, Nick (Brittney) and Nate Sorg; and great grandchildren, Oliver, Graham, and Delilah Sorg. He was also preceded in death by his wife of 68 years, Loretta in August 2016; and brother, Raymond Sorg. Mass of Christian Burial is 11 a.m. Friday at St. John the Baptist Catholic Church, 943 Powers St., New Haven with calling a half hour prior. Father Bill Sullivan officiating. Calling is 2 to 4 and 6 to 8 p.m. Thursday at E. Harper & Son Funeral Home, 740 St. Rd. 930 E., New Haven with a vigil at 3:30 p.m. Burial in the church cemetery with military honors. Preferred memorial to Heartland Hospice or Masses.

Hubert Joseph Sorg, 90, of Fort Wayne, formerly of New Haven, passed away Tuesday, December 6, 2016 at Parkview Regional Medical Center, Fort Wayne. Born in Hoagland, he was the son of the late Stephen and Florence (Hake) Sorg. He was a longtime... View Obituary & Service Information

The family of Hubert Joseph Sorg created this Life Tributes page to make it easy to share your memories.

Send flowers to the Sorg family.