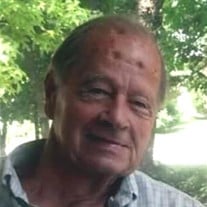 Herbert G. “Pete” Rigby, 88, passed away Thursday, September 29, 2016 at Genesis Healthcare, New Haven. Born in Jay County, he was the son of the late Emery and Lucille (Romine) Rigby. He served in the 187th infantry regiment as a paratrooper during the Korea War in the US Army. He was a Purple Heart recipient and was a member of American Legion Post 330. He retired in 1989 from Norfolk Southern Railway after 22 years. He joined the Civil Air Patrol at 16. He loved flying, airplanes, and restoring antique cars. He is survived by his wife, Doris, with whom he spent 49 loving years; children, Timothy (Peggy) Rigby of New Haven, Susan Follis of Laotto, Jane Nash of Cleveland, OH, and Lori (Jerry Miller) Nash of Grabill; grandchildren, Jason Rigby, Heather McClish, Jennifer Elrod, and Amy, Andrew, and A.J. Follis; and great grandchildren, Colen, Kirsten, and Cameron Rigby, Ethan McClish, Brooklynn Boersema, and Alexis and Carter Follis. He was also preceded in death by his siblings, Merle Rigby and Barbara Reed. Funeral service is 2 p.m. Monday at E. Harper & Son Funeral Home, 740 St. Rd. 930 E., New Haven with calling two hours prior to service. Chaplain Kris McPherson officiating. Burial in IOOF Cemetery, New Haven with military honors. Preferred memorials are to St. Paul Lutheran Church Gar Creek or Alzheimer’s Association. The family would like to extend a special thanks to the staff at Genesis Healthcare, the Heartland Hospice Nurses, and a special thanks to Chaplain McPherson.

The family of Herbert G. "Pete" Rigby created this Life Tributes page to make it easy to share your memories.

Send flowers to the Rigby family.