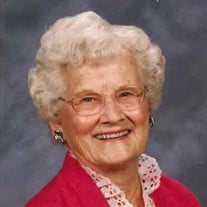 Helen Marie Armstrong, 92, of New Haven, Indiana, passed away peacefully at Park Place Assisted Living Saturday, December 26, 2015. She was born on January 2, 1923 in Albany, Indiana, the daughter of the late Clifford Miller and Margaret (Barlow) Miller. She was a graduate of Albany High School, where she met her husband, Paul J. Armstrong of Fort Wayne. They were married in September 1942 while Paul was serving in the United States Navy during World War II. They lived on numerous bases, including Norfolk, Virginia, where they made lasting friendships before Paul was stationed overseas. During the war, they met at Christmas time for a weekend at the Roosevelt Hotel in New York City, and also traveled to San Francisco to explore Fisherman’s Warf and ride cable cars. In 1948, they settled in New Haven, where Marie was a homemaker while Paul taught and coached at New Haven High School. Marie was active in the community as a charter member of the New Haven Women’s Club and as a longtime member of the New Haven United Methodist Church, including the New Haven United Methodist Women. She was an original member of the Alley Cats senior tap dancing troupe, and often fondly recalled performing for First Lady Barbara Bush and traveling to Germany with the group. She was especially proud of her two children: Paul “Mike” (Gail) Armstrong and Melanie (Mike) Marhenke, as well as her five granddaughters: Brett Armstrong, Deirdre Armstrong, Meghan (Bill) Skelton, Mallory Marhenke and Meredith (Dakota) Allosso. Marie’s four great-grandchildren always brought her special joy. She was preceded in death by her parents; two sisters, Viola “Madlyn” and Betty Jane; her brother, Donald; and her husband of 52 years. The funeral service will be held at 1:30 p.m. on Wednesday, December 30, 2015, at New Haven United Methodist Church, 630 Lincoln Highway East, with visitation one hour prior. Visitation is on Tuesday, December 29, 2015, from 2-4 p.m. and 6-8 p.m., at E. Harper and Sons Funeral Home 740SR 930 E., New Haven. Entombment will be at the Greenlawn Cemetery in Fort Wayne. Memorials may be made to New Haven United Methodist Church.

The family of Helen Marie Armstrong created this Life Tributes page to make it easy to share your memories.

Send flowers to the Armstrong family.