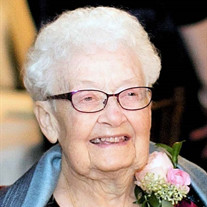 Gwendolyn “Gwen” Lucille Batdorf, age 91, of New Haven, Indiana passed away December 21, 2019. She was born on March 22, 1928 in Fort Wayne, Indiana to the late Walter Shady and Leona Leach. She was married to the late Keith Batdorf on June 25, 1949. As a teenager, Gwen enjoyed teaching tap, piano and accordion. She worked for the East Allen School System for more than 20 years. She was an avid long-time member of the New Haven United Methodist Church. She enjoyed reading, traveling, golf, playing games with those she loved most. She is survived in death by her daughters: Linda Batdorf of Cary, NC and Teresa Fancher and her husband Carlton of Fishers, IN; two grandsons: Richard and his wife Alex, and Chris and his wife Stephanie. Gwen also leaves a niece, Doreene Biggins and nephew Brian Shady as well as many cousins and beloved friends across the country. Gwen was preceded in death by her brother Walter Shady, Jr. Visitation for Ms. Gwen Batdorf will be Friday, December 27 from 2-4pm and 6-8pm. Funeral services will be Saturday, December 28 at 11am with a brief visitation at 10am. Following funeral ceremonies, Gwendolyn Lucile Batdorf will be laid to rest in IOOF Cemetery in New Haven, IN. Funeral arrangements are being held by Harper’s Community Funeral Home at 740 St. Rd. 930 E., New Haven, IN. In Leu of flowers, memorial contributions can be made to Sunny Seniors of New Haven United Methodist Church or charity of choice.

The family of Gwendolyn "Gwen" Lucille Batdorf created this Life Tributes page to make it easy to share your memories.

Send flowers to the Batdorf family.