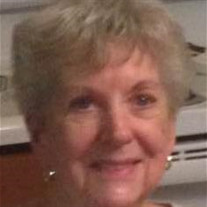 Gloria Agnes Kage, 84, passed away on Friday, January 6, 2017 at Parkview Hospital - Randallia, Fort Wayne. Born in Fort Wayne, she was the daughter of the late Gustave and Agnes (Strock) Stoeckley. She was a member of St. John the Baptist... View Obituary & Service Information

The family of Gloria Agnes Kage created this Life Tributes page to make it easy to share your memories.

Send flowers to the Kage family.