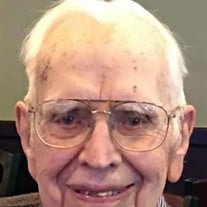 Rev. Gerald Ringenberg, 97, of Woodburn, IN, went to be with his Lord in his home on July 17, 2020. He faithfully served in pastoral ministry for over 70 years. He was born in 1923 on a farm, near Harlan, IN, to Henry and Edna Ringenberg. He graduated from Harlan High School and went on to graduate from Fort Wayne Bible Institute, which later became Taylor University Fort Wayne. He began pastoring while a student and then became the pastor of the North Mt. Zion Church in Continental, Ohio where he served from 1945-1953. He married Violet Egly in 1945 and they became a great ministry team throughout their years of service. While at North Mount Zion he also drove a school bus. In 1953, the farm boy moved to Cleveland, Ohio where he pastored First Missionary Church until 1966. He also served as Great Lakes District Superintendent for the Missionary Church denomination for one year, on many Cleveland Ministerial Committees and was President of the Cleveland Sunday School Association for three years. Sensing that God was leading them back to Indiana, He took a pastorate at the Woodburn Missionary Church where he served for the next 22 years until his “retirement” in 1988. During his time as pastor he also drove school bus for the local school system. Not content to be retired, in 1989 he became the pastor of the small rural Rehoboth Community Missionary Church, located about 50 minutes from Woodburn, in Albion, IN. He and Violet served the church until 2010. In 1999 he also became the visiting pastor at Woodburn Missionary Church at the request of the senior pastor. He noted that now that he was “retired,” he had the time to serve two churches. He and Violet spent hours and hours visiting the sick in hospitals and nursing homes and others in need until her death in 2013. Due to his hearing loss she had become his ears to those to whom they ministered. He continued doing visitation until his health no longer permitted him to walk well, and he was forced to limit visits to phone conversations using his phone with captions. Having grown up on a farm he developed very practical skills in carpentry, electronics, plumbing, mechanics, etc. There was nothing he could not fix or build, from rebuilding a car engine to building several garages and “supervising” the construction of the new Woodburn Missionary Church. He was always willing to help those in the church with their projects. Gerald and Violet were faithful attendees at the activities of their children and grandchildren, and also traveled throughout the US and to Ecuador, Jamaica and Turkey to visit their children and siblings. He and Violet spent many hours supporting Fort Wayne Bible College/Summit Christian College/Taylor University. They consistently were two of the top fund-raisers in the annual Fort Wayne Phonathons. Over the years, they also entertained hundreds of students on Sunday afternoons in their home. They were truly a couple that exemplified servant hearts. For many years he daily (except Saturdays) sent emails detailing their activities to his daughter (Dorcas) and son-in-law (Dave McDeavitt) who worked in the Middle East. Family and friends became aware of the emails and his list of recipients grew to over 50. The emails continued to Dave and Cherie after Dorcas’ death until this last year when his health declined. Gerald is survived by his children, Roger (Carol) Ringenberg, Gary (Kathy Lynn) Ringenberg of Ft. Wayne and foster daughter Yvonne Grady Nigh, who has faithfully served as his caregiver for the last two and a half years, and son-in-law Dave (Cherie) McDeavitt of Longview, TX; also 15 grandchildren: Jody Dietsch and Jill (Nick Henney) Park, Ft Wayne; Ryan (Jennifer) Ringenberg, Carmel, IN; Brent (Karla) Ringenberg, Wauseon, OH; Jacob (Carly) Ringenberg, Greenwood, SC; Jon Ringenberg, Oklahoma City OK; Sarah (David) Swygart, Forest Park, IL; Kathryn Ringenberg, Ft Wayne; Chad (Amy) Grieser, Blufton, IN; Anthony Grieser, Cincinnati, OH; Jennifer (Matt) Gaylor, Westfield, IN; Jaime Nigh, San Diego, CA; Kaliegh O’Grady and Hannah (Greg) Joliff, Indianapolis, IN; and Noah Nigh, West Lafayette, IN; 23 great-grandchildren; brother: Ralph Ringenberg of Elkart, IN and numerous nieces and nephews and great-nieces and nephews. He was preceded in death by his wife, Violet Egly Ringenberg and daughter Dorcas McDeavitt; by his parents, Henry and Edna Ringenberg and his sister, Mary Evelyn Swedberg. The family would like to express their appreciation to Heartland Hospice for their kindness and excellent care of their father. A private committal service will be held at Highland Park Cemetery, followed by a celebration of life memorial service at Woodburn Missionary Church at a later date. Memorials may be made to Woodburn Missionary Church, Fort Wayne Alumni & Resource Center, and World Partners (Fort Wayne).

Rev. Gerald Ringenberg, 97, of Woodburn, IN, went to be with his Lord in his home on July 17, 2020. He faithfully served in pastoral ministry for over 70 years. He was born in 1923 on a farm, near Harlan, IN, to Henry and Edna Ringenberg.... View Obituary & Service Information

The family of Gerald Wayne Ringenberg created this Life Tributes page to make it easy to share your memories.

Send flowers to the Ringenberg family.