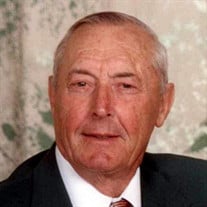 Francis J. Bowers, 87, died Friday, October 7, 2016 at Miller’s Merry Manor, Fort Wayne. Born in Allen County, he was the son of the late Henry and Mary (Maldeney) Bowers. Francis was very involved member of St. John the Baptist Catholic Church. He was a dedicated volunteer at the church, and enjoyed being a cantor and singing in the choir. He proudly served his country in the Air National Guard. After 30 years with Zollner Piston Corporation, Fort Wayne, he retired in 1994 as a machinist. In his later years, he devoted his time to playing music and sharing it with nursing homes in the area. Francis is survived by his children, Gregory (Laurie) Bowers of New Haven, Andrew (Rita) Bowers of Indianapolis, Francine (Tim) Bingham, Nicholas Bowers, Matthew (Lori) Bowers, and Alan (Julie) Bowers all of Fort Wayne, and Annette (Jim) Graham of Leo; and 14 grandchildren. He was also preceded in death by his wife of 53 years, Therese (Kohrman) Bowers, and five brothers and six sisters. Mass of Christian Burial is 11 a.m. Tuesday, at St. John the Baptist Catholic Church, 943 Powers St., New Haven with calling one hour prior. Father Bill Sullivan officiating. Calling is also 2 to 4 and 6 to 8 p.m. Monday at E. Harper & Son Funeral Home, 740 St. Rd. 930 E., New Haven with a prayer vigil at 2:00 p.m. Burial in St. John’s Catholic Cemetery, New Haven. Preferred memorials are to Masses or the church.

The family of Francis J. Bowers created this Life Tributes page to make it easy to share your memories.

Send flowers to the Bowers family.