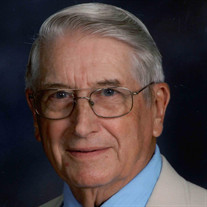 Eugene Leslie Bremer, 89, passed away on November 21, 2018. Born in New Haven, he was the son of the late William Christian and Lalah Florence (Stabler) Bremer. After graduating from New Haven High School, he served two years in the U.S. Army... View Obituary & Service Information

The family of Eugene Leslie Bremer created this Life Tributes page to make it easy to share your memories.

Send flowers to the Bremer family.