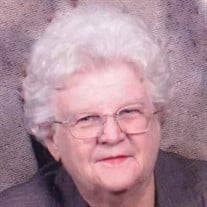 Doris Elaine Schaefer, 87, passed away on Monday, November 27, 2017 at Parkview Hospital – Randallia, Fort Wayne. Born in Putnam County, Ohio she was the daughter of the late Henry and Florence (Reese) Collar. She was a member of New Haven United Methodist Church. She married Virgil Schaefer at the Collar family farm, outside of Vaughnsville, Ohio on Christmas Day 1954. After she attended business college, Doris worked as an executive secretary to the manager of the funeral coach division of Superior Coach Company. After having children, Doris worked as a homemaker and volunteered as a scout leader, as a vacation bible school teacher, and as a volunteer in countless rolls at each church the family attended. Virgil, Doris, and their two children, Susan and Steven lived in Florida, Oklahoma, Ohio, West Germany, and Indiana while Virgil served in the Air Force. This experience led Doris to have a love of traveling. In addition to traveling, she enjoyed reading, sewing, cooking, volunteering at the church, and taking care of her family. She is survived by her husband of 62 years, Virgil Schaefer; daughter, Susan Schaefer of New Haven; brothers, Donald Collar, Jim (Ann) Collar, and Lloyd Collar all of Vaughnsville, OH; and several nieces and nephews. She was also preceded in death by her son, Steven Schaefer in April 2017. Funeral service is 11 a.m. Friday at New Haven United Methodist Church, 630 Lincoln Hwy E., New Haven with visitations one hour prior to service. Pastor Chuck Fenwick officiating. Calling is also 4 to 7 p.m. Thursday at Harper’s Community Funeral Home, 740 St. Rd. 930 E., New Haven. Burial in IOOF Cemetery, New Haven. Preferred memorials are to New Haven United Methodist Church (Missions) or Operation Smile.

Doris Elaine Schaefer, 87, passed away on Monday, November 27, 2017 at Parkview Hospital &#8211; Randallia, Fort Wayne. Born in Putnam County, Ohio she was the daughter of the late Henry and Florence (Reese) Collar. She was a member of New... View Obituary & Service Information

The family of Doris Elaine Schaefer created this Life Tributes page to make it easy to share your memories.

Send flowers to the Schaefer family.