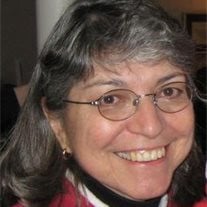 Dorcas Elaine Ringenberg McDeavitt went to be with her Lord on August 19, 2014 in Istanbul, Turkey where she and her husband served for the past 22 years. Dorcas was born on March 17, 1953 in Defiance, Ohio, where her father pastored a church in Continental, OH, but in the year she was born, the family moved to Cleveland, OH where her father began a new pastorate. The family moved to Woodburn, IN in 1966 to minister in the Woodburn Missionary Church. Dorcas graduated from Woodlan High School in 1971 and from Fort Wayne Bible College in 1976 in the nursing program that the school had in conjunction with the Lutheran School of Nursing. Her desire was to serve overseas as a nurse, but in her senior year in college she was diagnosed with Hodgkin Disease. We praise the Lord that she came through the radiation therapy and chemotherapy free from cancer, but it damaged her heart and lungs which eventually led to her recent health issues. After graduating, she worked as a school nurse at Huntington University and then went on to teach nursing at her alma mater, during which time she received an additional bachelor's degree from Ball State and a master's degree from Indiana University. Professionally, she had desired to serve overseas as a nurse in Africa, but organizations she applied to felt she was too susceptible to disease since they had removed her spleen when treating her cancer. She saw that as the Lord closing the door to overseas service and instead served the Lord through teaching nursing and through working in the children's ministry at Woodburn Missionary Church. While she had a great ministry here, the Lord had further plans for her. She and Dave McDeavitt were married on June 16, 1990 and set out together to serve the Lord overseas. Following a year of further education in California they moved to Turkey where they have served since 1992. Dave has taught English and Dorcas has worked in several ministries, one of which was helping in their local church's ministry to refugees. In 2012-13 she returned to the States for an extended period of time to help take care of her mother, Violet, who had cancer that led to her death in February of 2013. Dorcas leaves behind her loving husband and teammate of 24 years; her father, Pastor Gerald Ringenberg of Woodburn; and two brothers: Roger (Carol) Ringenberg and Gary Ringenberg of Fort Wayne, a foster sister, Yvonne (Randy) Nigh of Rushville; nieces and nephews: Jody (Andy) Dietsch and Jill Park of Fort Wayne; Ryan (Jennifer) Ringenberg, of Indianapolis; Brent (Karla) Ringenberg of Wauseon, OH; Jacob (Carly) Ringenberg of Greenwood, SC; Jon and Kathryn Ringenberg of Fort Wayne; and Sarah (David) Swygart of Marion; Jennifer (Matt) Gaylor of Westfield; Luke, Hannah and Noah Nigh of Rushville and Jaimie Nigh of Minneapolis, MN; 13 great-nieces and nephews; and aunts and uncles: Lester (Carole) Egly of Taylors, SC and Glenna (Milt) Wong of Fort Wayne, Dave (Louise) Nussbaum of Berne, Paul (Ruth) Erdel of Mishawaka, Mary Swedberg of Kokato, MN, and Ralph (Emily) Ringenberg of South Bend. She was preceded in death by her mother, Violet Ringenberg. The visitation will be held at Fellowship Missionary Church on September 5, from 2-4:00 p.m. and from 6-8:00 p.m. with the funeral service at Fellowship Missionary Church on September 6, at 10:00 a.m. with visitation at 9:00 a.m. Arrangements made by E Harper & Son Funeral Home, New Haven. Memorials may be made to: Fort Wayne Alumni & Friends Resource Center - Taylor University or World Partners (Fort Wayne). A fitting tribute to her life well-lived is found in the New Testament, Acts 9:36, where it is said of her namesake, "There was a believer in Joppa named Tabitha (which in Greek is Dorcas). She was always doing kind things for others and helping the poor." Our Dorcas was a living example of the biblical Dorcas and will always be lovingly treasured as we remember the way she loved and cared for others.

Dorcas Elaine Ringenberg McDeavitt went to be with her Lord on August 19, 2014 in Istanbul, Turkey where she and her husband served for the past 22 years. Dorcas was born on March 17, 1953 in Defiance, Ohio, where her father pastored a church... View Obituary & Service Information

The family of Dorcas Elaine Ringenberg McDeavitt created this Life Tributes page to make it easy to share your memories.

Dorcas Elaine Ringenberg McDeavitt went to be with her Lord on...