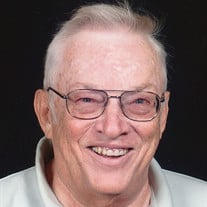 Donald “Don” Carl Witt, 86, passed away on Thursday, November 5, 2020 at Parkview Regional Medical Center, Fort Wayne. Born and raised in Pittsburgh, PA he was the son of the late Carl and Lucille (Martin) Witt. He grew up developing a love for baseball and the Pittsburgh Pirates; however, when the Pirates were off season, he was a big fan of the Pittsburgh Steelers. Donald graduated from Brentwood High school. Following graduation, he served in the US Army for two years. After his tour of duty in the Army, Donald attended and graduate from the University of Pittsburgh with a business degree. It was there he met the love of his life, Marion, who preceded him in death in 1996. Don worked for Sears, Aldens, and Montgomery Ward. He owned and operated the Box Shoppe for several years. Don never met a stranger he didn’t know and often had a story from the good ol’ days to share. He is survived by his children, Jeff (Jane) Witt of Huntington, Brian Witt of Fort Wayne, and Dawn (Robert) Brunner of Mahomet, IL; grandchildren, Kevin, Eric, Matthew, Anastasia, Danielle, Samantha, Aleyna, Jarrett, and Colten; five great grandchildren; brother-in-law, Robert Balserak; nephews, Robert and James; niece, Susan; his close friend, Carolyn; cousins, Glenn and Max; and many friends. He was also preceded in death by his sister, Janet Balserak. Funeral service is 3 p.m. Saturday at Harper’s Community Funeral Home, 740 St. Rd. 930 E., New Haven with visitation two hours prior. Pastor Marty Hampton officiating. Burial in Covington Memorial Gardens, Fort Wayne. Preferred memorials are to St. James Lutheran Church. To share online condolences, go to www.harperfuneralhome.com.

Donald &#8220;Don&#8221; Carl Witt, 86, passed away on Thursday, November 5, 2020 at Parkview Regional Medical Center, Fort Wayne. Born and raised in Pittsburgh, PA he was the son of the late Carl and Lucille (Martin) Witt. He grew up developing... View Obituary & Service Information

The family of Donald Carl Witt created this Life Tributes page to make it easy to share your memories.

Send flowers to the Witt family.