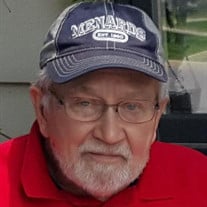 Donald Voelker, 81, passed away on Friday, January 15, 2021 at Hospice Home, Fort Wayne. Born in Carthage, SD, to the late John and Carrie (VanSharrel) Voelker, he grew up sharecropping and farming in the Argonne-Howard, South Dakota area about 25 miles from the homestead that Laura Ingalls Wilder lived. Don served 11 years in the National Guard and U.S. Air Force after high school. During that time Don met the love his life, Lilli Voelker (Petersen) in Sumter, South Carolina, while stationed at Shaw A.F.B. Their first date was in Myrtle Beach and they married three months later. They went on to be stationed in Germany, where had their son, Gene. After leaving the military Don moved with his family to Fort Wayne, IN to take a job with General Telephone Company (GTE). He remained in Fort Wayne, the rest of his life. Don’s hobbies included Amateur “HAM” Radio, taking pictures, writing stories about trains, steam engines, tractors, covered bridges, barns, and old toys. He also had a passion for fishing. He loved spending time with his granddaughters and ferried them around endlessly. He also enjoyed his dogs. He is survived by his wife of 57 years, Lilli; son, Gene; and granddaughters, Kira and Natalya Voelker. He was also preceded in death by his brothers, Louis Patterson and George Voelker. Graveside service is 11 a.m. Saturday at Bower’s Cemetery at the corner of SR 37 and Wheelock Rd., Fort Wayne with military honors. Masks and social distancing required. Preferred memorials are to the family. Arrangements by Harper’s Community Funeral Home, 740 St. Rd. 930 E., New Haven. For online condolences visit www.harperfuneralhome.com.

Donald Voelker, 81, passed away on Friday, January 15, 2021 at Hospice Home, Fort Wayne. Born in Carthage, SD, to the late John and Carrie (VanSharrel) Voelker, he grew up sharecropping and farming in the Argonne-Howard, South Dakota area about... View Obituary & Service Information

The family of Donald Voelker created this Life Tributes page to make it easy to share your memories.

Send flowers to the Voelker family.