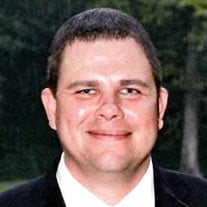 Daniel “Dan” Joseph Hammond, 41, passed away unexpectedly on Saturday, July 9, 2016 at his residence in Florida. Born in Fort Wayne, he was the son of Dick and Bobbie (Porter) Hammond who survive. Dan graduated from New Haven High School in 1993. He later proudly served his country in the Navy. Dan worked in the petroleum industry as a maintenance technician. He was an avid hunter and fisherman. He is also survived by his son, Tyler Hammond of Fort Wayne; siblings, Amy (Jeff) Oehler of Fort Wayne, Brent (Melissa) Hammond of Monroeville, and Tim (Lindsey) Hammond of Harlan; grandmother, Betty (Rogers) Porter of Monroeville; girlfriend, Christina Swartz of New Haven and her children; and many loving nieces, nephews, aunts, uncles, and friends.He was also preceded in death by his grandparents, Lawrence and Lucille Hammond, and Robert Porter; uncles, Mark Porter and Leroy Hammond; and nephew, Mark Oehler. Funeral service is 11 a.m., Saturday, at Lifeway Wesleyan Church, 7722 Moeller Rd., Fort Wayne with calling one hour prior. Pastor Rick Fletcher officiating. Calling is also from 2 to 4 and 6 to 8 p.m. Friday at E. Harper & Son Funeral Home, 740 St. Rd. 930 E., New Haven. Burial in I.O.O.F. Cemetery, New Haven with military honors. Preferred memorials are to the church. Thanks for coming to visit us during this sad time. We wanted to give you some history about Dan that caused us to be together today. We don't have an official declaration from a medical doctor but we do know that he had a history of diabetes. For the last several months he had suffered from intermittent flu-like symptoms that may have been caused by extreme swings in his sugar levels. We know that he attempted to control these levels but he had great difficulty controlling it. At this point we can only assume that he succumbed to his diabetic condition.

Daniel &#8220;Dan&#8221; Joseph Hammond, 41, passed away unexpectedly on Saturday, July 9, 2016 at his residence in Florida. Born in Fort Wayne, he was the son of Dick and Bobbie (Porter) Hammond who survive. Dan graduated from New Haven High... View Obituary & Service Information

The family of Daniel Joseph Hammond created this Life Tributes page to make it easy to share your memories.

Send flowers to the Hammond family.