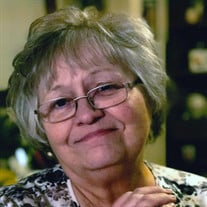 Cindy Sue Amstutz, 69, went home to her Savior, Saturday, April 7, 2018. Born in Fort Wayne, she was the daughter of the late Everett and Garnet (Federspiel) Amstutz. She was a member of Central Ministries, Fort Wayne. She was previously... View Obituary & Service Information

The family of Cindy Sue Amstutz created this Life Tributes page to make it easy to share your memories.

Send flowers to the Amstutz family.