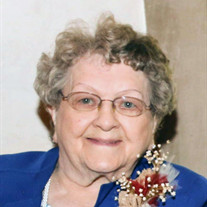 Charlotte E. (Groves) Kiracofe, having run her race for 93 years, passed away July 10, 2020, surrounded by family at her residence. Born in Fort Wayne on January 2, 1927, she was the daughter of Virl and Esther (Cornell) Groves. Raised in northeast Indiana as a young girl, Charlotte lost her mother at the age of 12. She moved to Fort Wayne and was then raised by her mother’s sisters, Myrtle Cornell, and Ethyl Houghton. Charlotte graduated from Elmhurst High School in 1945. She married the love of her life, Donald W., on November 10, 1946 and took joy in raising their 5 children. Charlotte was a beloved farmer’s wife, loving mother, and homemaker. She was known for her sense of humor and love for music, even attending a Luke Bryan concert at 90 years old. Happiest at home, Charlotte loved bringing together her family for holidays and parties, especially milestone birthdays. Charlotte loved to garden and tend to her flowers. She also enjoyed the thrill of riding amusement rides including the Corkscrew at Opryland at the age of 52. Neighbors of Charlotte gave her numerous chances to partake in airplane and helicopter adventures through the years. Charlotte is survived by her children, Miriam (George) Straub of Monroeville, Joyce Kiracofe of Monroeville, Roger (Kimberly) Kiracofe of Columbia City, and Janette Kiracofe of Monroeville. She is also survived by nine grandchildren; Kenton (Theresa) Kiracofe, Kendra (Scott) Goodwin, Kassandra (Nicholas) Graham, Weston (Amanda Jo) Voirol, Amanda (Stephen) Colbert, Ashley (Ben) Showalter, Vanessa (Michael) Diller, Rachel Kiracofe, and Ross (Alyssa) Kiracofe; and fourteen great-grandchildren. Also survived by sister-in-law Barbara Kiracofe of Sarasota, FL. In addition to her parents, she is preceded in death by her husband of 51 years Donald W. Kiracofe, son Geary W. Kiracofe, brother Cecil D. Groves, infant sister Maxine Groves, and brother-in-law, David Kiracofe in May 2020. Funeral service is 10am Wednesday at Harper’s Community Funeral Home, 740 State Road 930 East, New Haven with visitation one-hour prior. Pastor Marty Hampton officiating. Visitation is 2- 5 pm and 6 – 8 pm. Tuesday at the funeral home. Burial at IOOF in New Haven, IN. Masks requested. Memorial contributions may be made to the American Heart Association, American Diabetes Association, or the Parkview Hospice.

Charlotte E. (Groves) Kiracofe, having run her race for 93 years, passed away July 10, 2020, surrounded by family at her residence. Born in Fort Wayne on January 2, 1927, she was the daughter of Virl and Esther (Cornell) Groves. Raised in northeast... View Obituary & Service Information

The family of Charlotte E. Kiracofe created this Life Tributes page to make it easy to share your memories.

Charlotte E. (Groves) Kiracofe, having run her race for 93 years,...

Send flowers to the Kiracofe family.