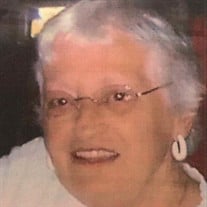 Charlotte Marcielle “Marcie” Kiebel, 84, lost her long battle on October 30, 2015. She married the love of her life, Francis “Bud” Kiebel, in 1953. They raised their family before she returned to her nursing career lasting 30 years. For a short time she was a nurse missionary to Haiti where she developed a sincere love for people. Upon her retirement she continued to give of herself through her volunteer efforts at New Haven Food Bank, Dove’s Nest, Mathew 25. Her quilting and stories effected the lives of many people at St. Anne Home in Fort Wayne. Surviving are Paula (Doug) Coil, Houston, TX, Mike Kiebel, Portage, MI, Peggy Anderson-Harper, New Haven, IN Barb Oliver, Seattle, WA and Mary (Heath) Hostetler, Woodburn, IN; seven grandchildren, and eight great-grandchildren. Also surviving are her sister Gloria Vernerder, IL and brother Richard Krieg, FL. ”Bud” went before her in 1987. Also preceding her in death were 2 brothers, Dean and Jay Krieg, and their parents John and Vergie Krieg. Mass of Christian Burial will be at 10 am Wednesday, November 4, 2015 at St. Anne Chapel 1900 Randalia, Fort Wayne, IN. Visitation will be at E. Harper and Son Funeral Home, 740 SR 930 E., New Haven, IN,Tuesday, November 3, 2015 from 5-9pm with a Rosary Service at 7:30pm. In Lieu of flowers, Marcie would like donations to be made to Mathew 25 (www. Mathew25online.org).

The family of Charlotte (Marcie) Kiebel created this Life Tributes page to make it easy to share your memories.

Send flowers to the Kiebel family.