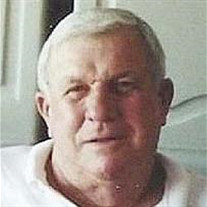 Bruce Fredrick Creager, 89, passed away Tuesday, April 25, 2017 at Hope Hospice, Fort Myers with his family by his side. Born in Liberty Center, Ohio he was the son of the late Fred and Ruby (Benskin) Creager and was a 1945 graduate of Liberty Center High School. He attended St. Paul Lutheran Church, Liberty Center. Serving his country in the US Army during WWII, he was a member of VFW Post 10097, Fort Myers, American Legion Post 274, Fort Myers and a life member of VFW Post 6596, Liberty Center. In 1947, upon his return from duty in Italy, he joined the family road construction business, Fred R. Creager and Sons, where he worked for the next 28 years. There he managed the company with his father and brother until he left the firm in 1975. He went on to spend five years at Wayne Glore Trucking, Defiance before moving to Fort Myers, Florida in 1980. Construction always being a topic of conversation, a chance meeting at morning coffee led Bruce to work as a grader operator for several highway contractors in Southwest Florida. He eventually worked for the City of Sanibel, where he retired in 1994. His love of construction followed him into retirement where he continued to operate equipment on the family farm, just last year regrading an eroded swale which was ready to seed with no raking required. In his last days, he was still critiquing the construction of the newest parking lot being added outside his hospital window. He is survived by his children, Rod (Mary Ann) Creager and Cinda (Ted Kuhns) Creager both of Napoleon, and Tim Creager of Fort Myers, FL; brother, Ralph Creager of Liberty Center; grandchildren, Chevas Hefflinger of Woodburn, IN and Kade Hefflinger of Liberty Center; step granddaughter, Jenny (Jason) Seiler of Napoleon; and five step great grandchildren. He was also preceded in death by his wife of 60 years, Peggy (Barlow) Creager in 2009. Memorial service is 10 a.m., Saturday, June 24, 2017 at St. Paul Lutheran Church, 8074 County Road T, Liberty Center, Ohio with calling one hour prior to service. The Rev. Keith Witte officiating. Burial in Young Cemetery, Liberty Center, Ohio. Preferred memorials to St. Paul Lutheran Church, Liberty Center, Liberty Center Public Library, or Hope Hospice, Fort Myers, FL.

Bruce Fredrick Creager, 89, passed away Tuesday, April 25, 2017 at Hope Hospice, Fort Myers with his family by his side. Born in Liberty Center, Ohio he was the son of the late Fred and Ruby (Benskin) Creager and was a 1945 graduate of Liberty... View Obituary & Service Information

The family of Bruce Fredrick Creager created this Life Tributes page to make it easy to share your memories.

Send flowers to the Creager family.